Just In: Glass shattered as Plateau Lawmakers fight over Mace 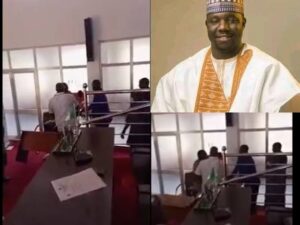 Lawmakers in the Plateau State House of Assembly nearly exchanged punches on Thursday morning during the Impeachment of the speaker, Hon. Abok Ayuba Nuhu.

POLITICS NIGERIA gathered that 16 out of the 24 lawmakers voted in favour of the impeachment.

The plot of Abok’s removal began about a week ago as the speaker and the state governor, Simon Lalong have been at loggerheads. Their quarrel began after an attack in Yelwan Zagam, the community of Jos North, where people were killed.

Reliable source reveal that the speaker started criticising the governor openly. However, on Thursday morning, house of assembly members converged at the chamber of the house to begin the process.

YOU MAY ALSO LIKE:   Fayemi pardons 12 prisoners in Ekiti

Once the matter was tabled, rancour immediately broke out as the lawmakers began to exchange words. Some lawmakers under the PDP, loyal to the speaker grabbed the mace to prevent the impeachment process.

A struggle ensued as APC lawmakers(Majority) also grabbed the legislative instrument and returned it to its position.The impeachment went on as planned.

The entire house of assembly complex was surrounded by Security Operatives.